Ballydavid Starjet of the Kingdom (t) 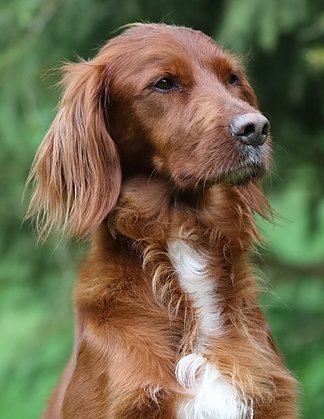 Starjet of the Kingdom

The next generation are now with us. Combination of Brian Hinge Krog Red Garlic Pepper the first ever Irish red setter to win the Danish Championship and Ballydavid Storm who was 2nd in the Irish championship with 50 dogs competing over two days.

Ballydavid Storm has a list of awards to long to mention with Open stake wins in both Ireland and Northern Ireland. Given excellent award at the Irish red setter club show. Her last litter of pups Produced Malstabodarna Idun who became a field trial champion at 18 months old and also won the young class in the show ring. She has won 7 open stakes in 2017 and 1 win away from an international champion. Ballydavid Storm possess great speed and stamina with a very stylish gate. Bird control is exceptional.

Coming from the most sought after bloodlines in Ireland with a list of international champions behind her such as Remkilens T-ebba, Ballydavid Airforce, Aodh, Creg Rena, Ballydavid Starjet to name a few.

Pups are now just over 4 weeks old and will be ready to go to their new homes on the 25th Nov. Pups are very strong and energetic and very similar to the last litter. Some males are still available right now. Contact me for more information.

Pedigree for both dogs can be found on the SKK website. Hips A, clad free, pra rcd 1&2 clear